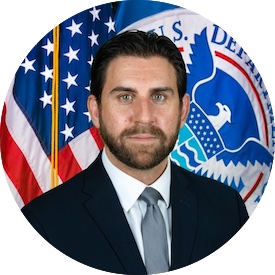 “Trust yourself. You are in this role for a reason.”

In the Eye of the Storm: A Profile of Joe Sciortino

Joe Sciortino, Chief of Staff at FEMA Region 2 and CSA Regional Director, reflects on the keys to a successful crisis response.

Joe Sciortino never anticipated a career defined by crisis. He began his professional life in local government, ultimately becoming chief of staff to the Staten Island Borough President. In his day-to-day, Joe managed public works, transportation and regional development projects, getting to know his community intimately.

Suddenly, a crisis struck which transformed Joe’s role as he knew it and shaped his future career trajectory. On 29 October 2012 Hurricane Sandy hit the shores of New Jersey and, as Joe says, ‘the rest is history’.

Hurricane Sandy ravaged the east coast, causing extensive flooding, erosion, and damage that affected all of New Jersey. The magnitude of the destruction was unprecedented and the recovery effort presented a unique challenge for the city. As chief of staff to the Borough President, Joe became part of the response for Staten Island, helping to implement both immediate and long-term recovery projects. For Joe, ‘everything was really new’, especially working with federal agencies to coordinate the response.

Since Hurricane Sandy, and more recently Hurricane Maria, Joe has never left the world of crisis and emergency management. He now serves as chief of staff to the Regional Director of FEMA Region 2, which oversees federal emergency management efforts for the jurisdictions of New York, New Jersey, the US Virgin Islands, and Puerto Rico. After a decade of experience in managing crises, Joe has developed an acute ability to lead others in the midst of chaos.

Soon after Joe assumed his current role as chief of staff within FEMA Region 2, the COVID-19 pandemic swept across the world. Adjusting to a new role while still going into the field every day during this global crisis was a challenging feat. Joe prioritised a few key principles which form the foundation of successful emergency management in any organisational context.

In the chaos of a rapidly unfolding crisis, clear communication is essential. Changing circumstances, disorganisation and misinformation can lead organisations into an extended game of ‘telephone tag’, which slows their response. As a chief of staff, Joe highlights the importance of maintaining lines of communication up and down the structure of the organisation.

To keep information up to date in an evolving emergency, Joe recommends that organisations plan structured ‘sync’ calls throughout the day. During an emergency, ‘staff want transparency’: having multiple updates across the organisation each day provides staff with the opportunity to share key developments and stay informed on the status of the ongoing crisis.

Similarly, as a gatekeeper, the chief of staff must ensure that their principal has access to accurate information. To provide their leader with situational awareness, the chief of staff must maintain the pulse of the organisation and report on key developments. In this capacity, Joe underscores the value of ‘communicating courageously’. Courageous communication requires that information is shared clearly and quickly, even if the update is negative or disappointing.

Effective communication relies on a foundation of strong relationships. During a crisis, a chief of staff relies on the trust they have fostered both with their principal and with staff across the organisation. Sometimes, this base of trust must be established quickly. Over the course of the last two years, for example, Joe Sciortino has worked with five different principals. In cases like his, ‘the tempo of the relationship building will [need to] be fast’. But it is essential to successful crisis management: as a chief of staff during an emergency, ‘you are looked at as a wartime consigliere because you and your principal will be glued at the hip’.

In addition to establishing a close relationship to the principal, chiefs of staff must also understand and care for their organisation’s workforce. Joe advises his peers to ‘focus on the staff part of the chief of staff job title’. To monitor the health of the overall organisation, the chief of staff must check in with workers up and down the organisation to ensure they are coping well before, during and after a crisis. Joe emphasises the value of compassion, particularly in organisations that respond to help others during emergencies. He notes that staff in these circumstances ‘could be tired, burnt-out, or survivors themselves’.

As a chief of staff in any organisation, ‘you are there to help build and create an operating environment and you play a key role in organisational health’, says Joe. Where possible, Joe suggests, chiefs of staff should ‘put their personality into the role’, as it pays dividends to be ‘people-friendly, approachable and a good communicator’, especially when a crisis erupts.

When an emergency hits, it is easy to lose sight of greater goals and responsibilities as chaos and adrenaline flow through an organisation. Leaders and staff often abandon their usual functions and volunteer themselves for random tasks. While well-intentioned, this disorganisation hinders recovery efforts. In all organisations, Joe advises chiefs of staff to set up a ‘small crisis team with clearly identified roles and contingency plans’ for common events such as a loss of communications.

It is important to emphasise that these ‘keys’ to crisis management success can be entirely undermined if the chief of staff cannot gather the energy to implement them. Working through a crisis necessitates going above and beyond to support the principal and organisation. It is not simply clocking in and out each day. ‘You have to put the Mission and others first’, says Joe. Maintaining personal stamina becomes both increasingly difficult and salient during a crisis.

As such, Joe highlights the importance of healthy habits, a balanced diet and taking ‘mental breaks’. ‘You have to find things that make you feel refreshed’, Joe advises. These self-care practices allow you to reset, reflect, and re-enter the chaos with a greater sense of clarity.

Reflecting on his career, one marked by some of the most challenging crises of our time, Joe recognises both the immense difficulties and rewarding aspects of the chief of staff role. As he says, ‘It’s a selfless job and it’s the best job’.

While you may not regularly confront existential emergencies in your own organisation, Joe’s insights into crisis management can be useful to you when your organisation faces both big and small obstacles. Joe advises chiefs of staff in any sector to have a strong preparedness strategy, and above all else, confidence in their own abilities. ‘Trust yourself’, Joe reminds us; ‘you are in this role for a reason’.

Joseph Sciortino, raised in Brooklyn, New York, has been in Government Service for 12 years and currently serves as the U.S. Federal Emergency Management Agency’s Chief of Staff for Region 2 (NY, NJ, PR, USVI).

Transcribed and written by Alexandra Atkeson, The Chief of Staff Association.