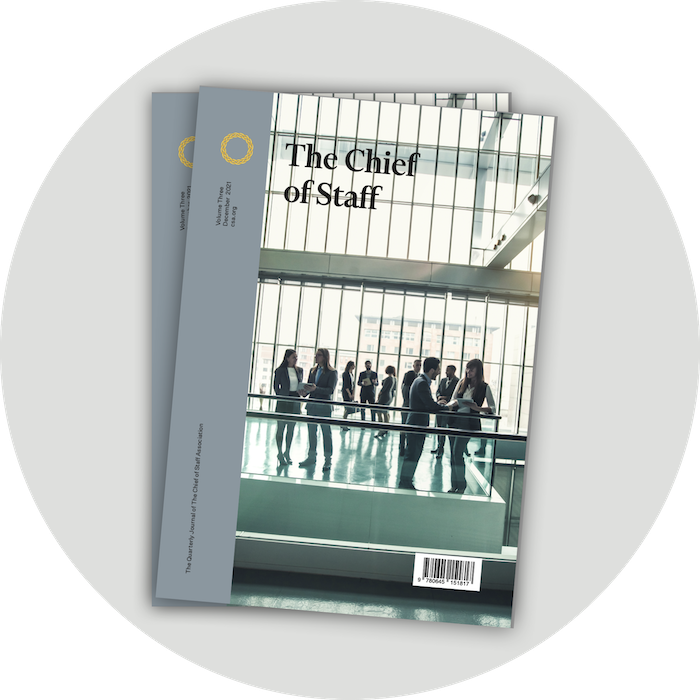 Enrique Perez, Managing Principle of Mission Park Capital, reflects on the wide range of skills chiefs of staff possess and the value they hold beyond the chief of staff role.

You’re sitting with others and the conversation turns to your professional occupation. You share that you’re a chief of staff—which, depending on the audience, may draw some well- intentioned but curious stares. While the role has existed for some time, albeit under different titles, mostly in the public sector, and the responsibilities can range based on the needs of the principal (CEO, Secretary, Chairperson, etc.) and organisation, it can still seem like a ‘black box’ to many or draw innocuous comparisons to Leo McGarry’s character in the television show, ‘The West Wing.’

Moreover, the stakes are arguably higher when this conversation is in a professional setting; perhaps you’re giving thought to your career and next role. How do you explain the role during an informational or job interview? For most aspiring job applicants, their ideal thirty-second elevator pitch doesn’t require the first ten seconds being dedicated to a flash explanation of the chief of staff role. What can you focus on? How can you relay the value you would contribute to an organisation?

As much as I would like to relay certainty, given the specific responsibilities a chief of staff may have at differing organisations, the answer is: it depends. Your focus, however, should be on your transferable skills. Essentially, consider which skills from your chief of staff role can also be used in a future role and throughout your career. While there are specific quantitative and qualitative skills which may be in play, perhaps the greatest skills gained in the chief of staff role align with any organisation’s most valuable asset—its human capital. While not an exhaustive list, below are some skills you may have gained and honed during your tenure as a chief of staff which can serve you, and a future organisation, well in the future.

To be sure, this is not a technical term, but a chief of staff often has a unique seat allowing them to have insights across the organisation. With some experience, the ability to anticipate problems or see gaps needing to be filled grows to a point where they can propose and help create solutions before an issue reaches critical mass. This can include mediating potential and actual disputes between parties; navigating uncertainty and exercising the adaptability required to get from start to finish; and perhaps, most importantly, handling issues before they rise to the principal by resolving matters early.

This set of skills are far-ranging, but have served you well in your role and will in subsequent roles. To start, your written, verbal, and non-verbal skills have been honed over time in carefully crafted emails and memos, phone conversations, and meetings. Learning, and later knowing, how to read a room—or table—of people has become a valuable input for how you interact. You’ve also learned the value of listening first and speaking last, especially when you are representing the principal to others.

As a chief of staff, you are exposed to and interact with a wide variety of stakeholders. You have gained the ability to influence others up and down the organisational chart—not only because you happen to be the chief of staff, but because you’ve learned that relationships matter. This extends to your role when representing the principal to external stakeholders, including when respectfully relaying what they may not want to hear.

The collaboration required in your role, and future roles, is key. Again, this includes across the organisational chart, including for initiatives or projects which don’t have a clear home. When charged with something by the principal, it is also incumbent upon you to discern what to funnel, filter, and curate for what the principal needs to know and when—which can certainly vary by principal. For instances when the principal is engaging on a matter at hand and collaborators are seeking their time, gatekeeping on your part can also play a role of what to gather and relay or whether time for direct collaboration is needed.

‘You act as a needed sounding board—with the ability to disagree.’

Finally, you’ve convincingly become comfortable with the uncomfortable situation of ‘speaking truth to power.’ You are a confidant to your principal, including knowing and understanding what is confidential and what is not. Moreover, you act as a needed sounding board—with the ability to disagree. To be sure, any disagreement you may have becomes secondary to what decision the principal eventually makes. Yet before that, during their decision-making process—where you also hone your decision-making ability—you play the crucial role of the traditional Devil’s Advocate, even when you personally agree, to help anticipate issues, stress- test arguments and assumptions, and ask questions no one is asking or doesn’t want to ask.

When advising principals, and sometimes considering the organisation as a whole, helping prevent mission creep into non-critical areas can take courage to address what might otherwise be a drain on time and resources, no matter how much of a pet project it may be in the eyes of the beholder.

Sometimes this simple explanation of your role can be best. You are accustomed to high accountability across the organisational chart—including the issues which, having no clear or easy solutions, reach your desk and you must act. This includes, across a scope of responsibilities, being a stop gap if something isn’t getting done, or even filling an open position on an interim basis. Your unique seat has provided you a birds-eye view and detailed understanding of the strategic and operational elements of your organisation, which has allowed you to learn how to zoom in and zoom out. In some respects, this may be your greatest contribution and value to the principal and organisation, as you are relied upon to help move the needle forward. This includes how you complement the principal—as much as you are learning from them, they are also likely learning from you, all of which is better for the organisation and ability to execute.

You can read all you want about leadership—and I encourage it—but your real abilities here are honed when practicing it. As a chief of staff, this often involves putting your interests aside to serve the principal and organisation. This learned humility is fostered through the behind-the-scenes work you do, not seeking attention for it and focusing on Getting Things Done. Sometimes this can lead chiefs of staff to not highlight their accomplishments or role in subsequent settings, so some mindfulness around this can be beneficial.

In order to succeed in your chief of staff role, and in future positions, you will have to be an honest broker. Throughout the organisation, especially with those with whom you will have repeated interactions, this takes trust—which can also take time. Honing this skill now will pay dividends in the future, as your reputation will precede you moving forward.

Finally, your leadership also takes the form of modelling behaviour for the organisation as an extension and representative of the principal. Yes, you have imperfections and will undoubtedly trip up from time to time, but the concerted effort you have made is subsequently reflected in others.

For me, those well-intentioned curious stares I shared earlier came from my parents. My initial attempt to explain my work was futile—reading my to-do list out loud helped them better understand my role and provided me the impetus for figuring out how to better communicate what value I contributed as a chief of staff.

I’ve been very fortunate to have been a chief of staff to multiple principals, including across political parties. I look back at the experience and whatever small contributions I made with great fondness. For me, I’ve been able to transfer those skills to serve others in my long-time passion of personal finance. Now, having my own firm as a financial advisor and investment manager, I spend my time helping clients navigating and adapting to uncertainty, listening a great deal to collaboratively help them determine their financial goals and work towards them, acting as a judgement-free sounding board in seeking to instil confidence in their decision- making, analysing and communicating about potential investment vehicles, and choosing to be a Registered Investment Advisor where I am legally obligated to put my clients’ interest first. While my clients range from recent college graduates to pre-retirees, each represents a principal where I am proud to stand by them as the chief of staff for the financial elements of their lives.

There are certainly other transferable skills, including more specific ones, which can help you transition to what comes next. The two keys I would offer for your consideration are (a) giving thought to what your skills are and how they, in fact, translate to specific roles, and (b) to focus on how you will highlight your accomplishments. For the latter, this may include starting to track your accomplishments now; simply listing your chief of staff job specifications won’t demonstrate the value you can bring to another organisation. Your being a chief of staff has been valuable to many—it is up to you to help translate it into how you can contribute and succeed in whatever it is you want to do next professionally.

Enrique Perez is currently the Managing Principal of Mission Park Capital, based in Cambridge, MA. From 2006–2012 he served as a Deputy Chief of Staff and Chief of Staff to four Undersecretaries of Business Development and a cabinet-level Secretary of Housing & Economic Development for the Commonwealth of Massachusetts. He subsequently served in Chief of Staff roles in the private and social enterprise sectors from 2014–2016. He holds an MBA (Yale School of Management) and BA in History (Williams College).